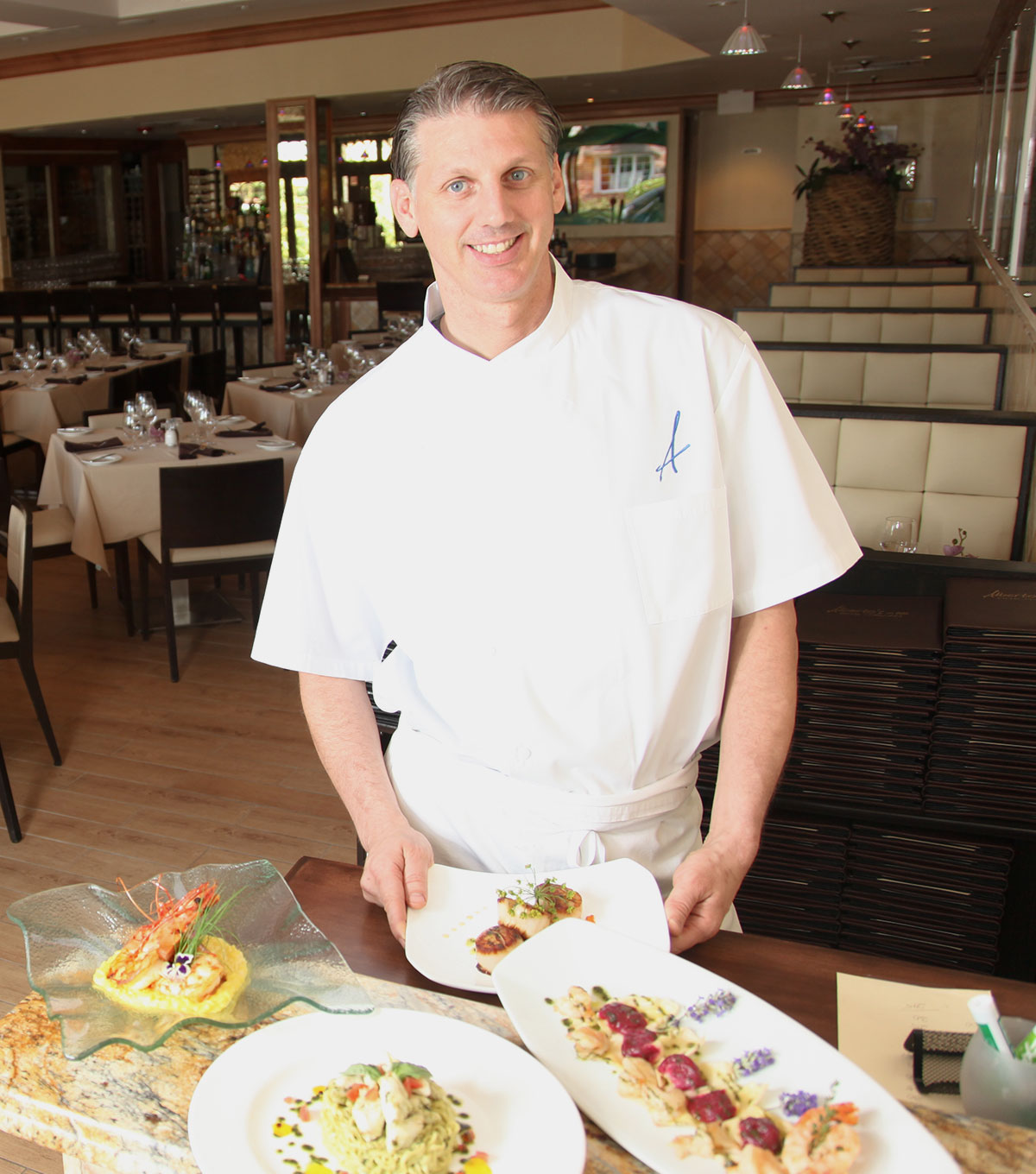 Chef Alberto Varetto was born in Torino, the capital of Italy’s Piedmont region, and began his culinary apprenticeship at the age of 12. A culinary prodigy, at fifteen Alberto won a prize representing Italy in a French culinary competition restricted to one representative – most competitors 25 or older – from all the schools in Europe.

Alberto received his Diploma Alberghiero di Cucina before beginning his culinary career in Italy. In 1997, Alberto brought his international culinary skills and expertise to the United States, joining the renowned Chef Roberto Donna at the Galileo Ristorante in Washington, DC. Alberto was instrumental in opening Laboratorio del Galileo, Cesco and il Radicchio restaurants. 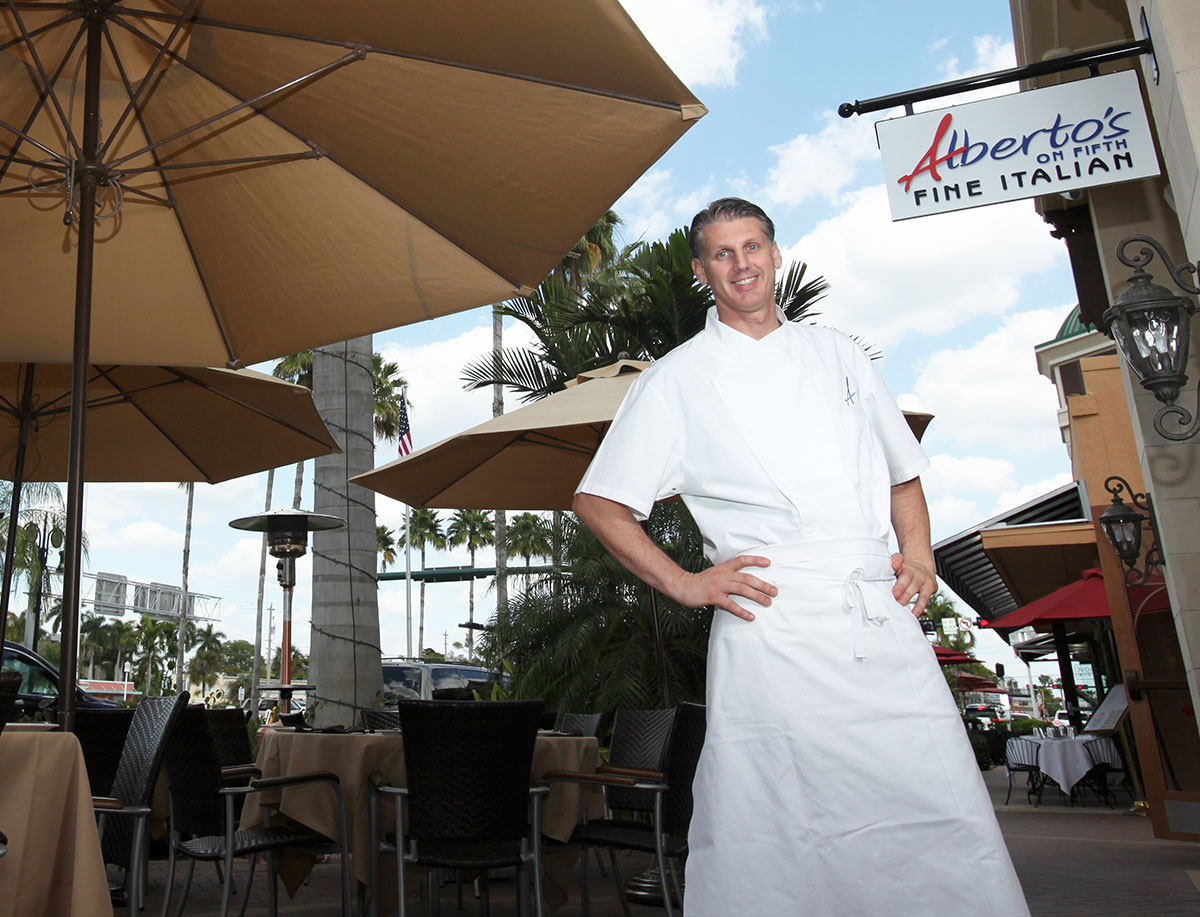 In 2001, Alberto relocated to Florida to serve as executive chef of the renowned Sale e Pepe restaurant at the Marco Beach Ocean Resort on Marco Island, where he reigned for nine years. During his tenure at Sale e Pepe, the restaurant achieved the AAA Four Diamond Award for five consecutive years, named one of the top 500 Places to Dine by FloridaTrend magazine, and given the prestigious Zagat Rating of “Very Good to Excellent”.

He was also invited to cook at the honorable James Beard Institute in New York in 2006. With Alberto’s on Fifth, Chef Alberto plans to continue his culinary journey thrugh fine dining with dishes of bold authentic flavors inspired by his Piedmontese heritage of French-influenced Italian cuisine. 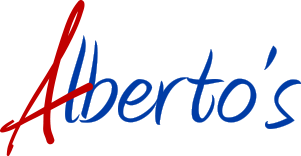 Q. What is your culinary background?
A.

I attended culinary school for five years in Tornia (also known as Turin), the capital city of Piedmont in northern Italy that is well known for its refined architecture and cuisine. So after brief stops in France, Spain and Switzerland to obtain experience and broaden my culinary tastes (travelling and working gives you experiences not available in a classroom), I moved to Washington, D.C. at 19 to work in the legendary Italian restaurant Galileo on DuPont Circle with Chef Roberto Donna where I served politicos, celebrities, Beltway power brokers and foodies.

Q. What inspired you to become a chef?
A.

Truthfully, when I attended elementary school the food was terrible. I always came home hungry, so I began to cook for myself and ate my own meals at home after school.

Q. What brought you to Naples?
A.

In the 90s, I was a sous-chef at Il Laboratorio del Galileo, a glass-walled “showcase” kitchen lab within the Galileo restaurant in Washington, D.C., serving a different 10-12-course menu in a small dining room with only seven tables, five nights a week. The meal depended entirely on what the local farm markets had to offer that morning and what Chef Roberto Donna imagined as he strolled through the stalls. The owner of the Marco Ocean Beach Resort invited me to relocate to Marco Island and open Sale e Pepe in a replicated, palace-proportioned, Italian-villa setting with an outdoor terrace serving authentic Italian cuisine.

Q. You were a bit of a child prodigy in the culinary world at fifteen, having already won a French competition representing Italy. Can you tell us about studying and performing at a high level at such a young age?
A.

Europe has a lot of culinary history, so the teachers are very strict and expect a great deal from you. I was 14 years old when I won best student out of more than 700 students at my Tornia culinary school and was sent to Valencia to represent Italy while competing against 25-year-olds from culinary schools across Europe. I cooked a first course, a main course and a dessert. In addition, I made the same meal for the journalists and food writers from prestigious international publications. They liked my cooking, and it made me feel like a superstar. It made me realize that’s what I wanted to do.

Q. How did the advantage of youth play out in your career?
A.

At that young age, you don’t have any ego. It’s almost a game — you just do what you do because you love it. My youth opened many doors for me. In my business, you need to be able to work with Michelin chefs and bring a nice background. The chefs will then invite you into their kitchens and teach you. They opened their doors and let me work with them because you worked for free, not like in the United States.

Q. Who were your mentors?
A.

Chef Robert Donna is from my hometown and attended the same culinary school in Tornia. He taught me how the culinary system works in the United States — it’s much different than in Italy because you don’t find all the same ingredients, so you must adapt but keep the tradition of the recipe intact. Those first couple of months were crazy because I didn’t speak any English and I worked with American, Spanish and Italian chefs.

Q. For 11 years, you were the executive chef at Marco Beach Ocean Resort’s Sale e Pepe, which snagged many awards and illustrious designations during your tenure that include the AAA Four Diamond Award for five consecutive years. How did you go about setting the restaurant apart?
A.

Earning those awards took a lot of patience and hard work — training and ensuring people understand your passion and the direction you want to take. Italy’s climate and cuisine is so different from north and south. I have spent all my life doing my job and doing it right according to the real Italian culture where meals are prepared using grandmother’s recipes based upon what is available. I had to modify recipes to what I can find in the United States, but I still teach the Italian tradition. For example, risotto takes 20 minutes to prepare. So if you are served risotto within five minutes, send it back because it’s not prepared the right way like what we do in Italy.

Q. What inspired your move to Alberto’s on Fifth?
A.

I wanted to do something for me after 11 years at Sale e Pepe, so I created Alberto’s house. I wanted to prove to myself that I could create a very good restaurant that will last a long time. It’s my place where I can build stability, build my future and be in charge of myself. Owning my restaurant also allows me to judge my own time so that I can schedule time with my family and travel.

Q. Which dishes are you particularly proud of ?
A.

I am proud of all my dishes on the menu because they are all done to perfection in my eyes. We take a lot of pride in our restaurant. Everything is homemade and fresh from our crusty bread to the pasta, soup, sausage and traditional Piedmont cake. No machines, no television and no deep fryer. It’s like dining at home in Italy when grandmother made Sunday dinner.

Q. What do you find challenging?
A.

It’s very difficult to find qualified help in Naples and keep consistency at one hundred percent. When I retire from my restaurant, I want to open a school to provide people with good training.

Q. Who or what are your greatest culinary influences?
A.

All the chefs that I worked with throughout my career. When you work with great chefs, it’s like a puzzle. You take what you need or what you consider to be the best of each person, and it all comes together. There’s always something new to learn. … From the chef or a dishwasher, I am constantly learning.

Q. What has been one of your favorite culinary experiences?
A.

A James Beard (Institute) House dinner in New York at Christmas. You must be invited to this prestigious event. I didn’t want to ship the ingredients by plane, so we rented a truck and drove three days to get there. I served six different canapés at the reception and six courses for the sit-down dinner, including a pasta course. The main dish was lamb. For dessert, a chocolate mousse with raspberry sorbet and tiramisu served in a champagne flute.

Q. What are your favorite culinary resources (books, blogs, etc.)? How do you keep your dishes relevant?
A.

My favorite resource is my taste memory — the way I cook is by taste and by memory. I don’t have a recipe book. I just keep adjusting until I remember the flavor I remember. My dishes are cooked in the same traditional way that they were prepared 100 years ago. It’s the presentation that’s different and helps modernize something that is very traditional.

This website uses cookies to improve your experience while you navigate through the website. Out of these, the cookies that are categorized as necessary are stored on your browser as they are essential for the working of basic functionalities of the website. We also use third-party cookies that help us analyze and understand how you use this website. These cookies will be stored in your browser only with your consent. You also have the option to opt-out of these cookies. But opting out of some of these cookies may affect your browsing experience.
Necessary Always Enabled
Necessary cookies are absolutely essential for the website to function properly. These cookies ensure basic functionalities and security features of the website, anonymously.
Functional
Functional cookies help to perform certain functionalities like sharing the content of the website on social media platforms, collect feedbacks, and other third-party features.
Performance
Performance cookies are used to understand and analyze the key performance indexes of the website which helps in delivering a better user experience for the visitors.
Analytics
Analytical cookies are used to understand how visitors interact with the website. These cookies help provide information on metrics the number of visitors, bounce rate, traffic source, etc.
Advertisement
Advertisement cookies are used to provide visitors with relevant ads and marketing campaigns. These cookies track visitors across websites and collect information to provide customized ads.
Others
Other uncategorized cookies are those that are being analyzed and have not been classified into a category as yet.
SAVE & ACCEPT